The fuel pump on my my 1984 BMW 633 CSi had progressively gotten more and more loud recently, but I ignored that. I drove to my fenced storage sheds in the middle of the night to get something out of there, and when I tried to start the car, it wouldn’t.

Getting out of there was interesting since the place has high fences, and the exit door opens when a car approaches it. It took some Jackie Chan moves for me to actually get out. Later, I towed the car to my office, and checked … the fuel rail has no pressure.

I prefer working on parts while they’re on my warm, clean workbench, as opposed to underneath the car. So, I removed the fuel pump from the car.

The pump and filter are mounted on a plate that locates them together. To remove the plate from the car, loosen the two 10mm nuts at the back, and the nut at the front. Push the front bolt in, and then slide the plate out of its rear mounting. This gives you some flexibility that helps you get to the two electrical connectors on the actual pump. To get to them, slide the covering electrical insulation hoods down, and then use sockets or wrenches. The two nuts are not the same size. As I recall, one is 8mm and one is 7mm. Then, loosen the 8mm bolt that affixes the clamp that locates the fuel hose so it doesn’t pull loose from the filter. Undo the clamp for the fuel line that goes into the fuel pump, and the clamp for the fuel line that goes into the filter. Now, you’re ready for your gasoline shower, and you realize you should have put on gloves on each hand, and brought a larger drip try, and wow, the splashes travel far. Blink often. 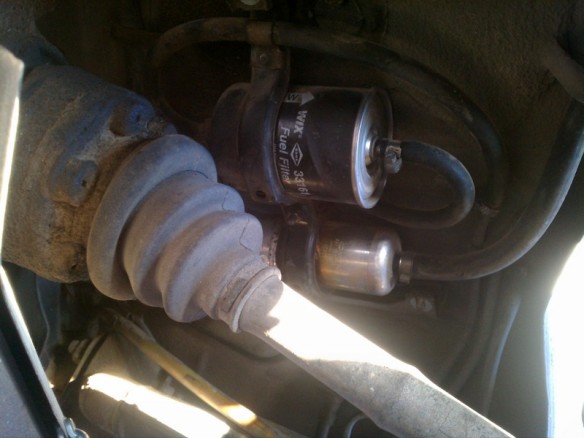 I drained the filter (by turning it into all sorts of positions so the fuel spills out) and then separated the fuel pump from the filter. When you put the filter down on a workbench, be aware that some fuel might still leak out.

Away from the worst gasoline fumes, I touched two 12V leads, one + and one -, to the two electrical connections on the fuel pump. It made a spark and there was a sort of jolt but no sound like a pump going. So, this means it’s a bad fuel pump.

A new unit is more than $100, and it’s not just about replacing the main fuel pump. Often, its failure has a root cause that’s the failure of the transfer fuel pump that’s located in the gas tank and is supposed to help reduce vapor lock by keeping the fuel inside the fuel line under pressure at all times.